Twitter is quite a specific social network. It cannot boast of such a wide reach as Facebook, it is not as trend-setting as Instagram, but it has been with us for many years, still having a loyal fan baseów. Not to mention the fact that recently the service has been the best sourceósource of information from the Oval Office 😉 Last year was marked by a revolutionary change – The service has increased the amount of signóin possible to use in one post as many as twice – from 140 to 280. Now it shows more news – In line with the trend of chatbots and automation.

Twitter’s API for business, shown yesterday, gives live access to tweeting, retweeting, liking or following. API will allow developers to build apps that drive customer service, chatbots and brand engagement on Twitter. Additionally, on January 15, the API will be integrated with Direct Message so that developers can build a more natural experience (so that a conversation feels more like a conversation with a human than with a bot).

Twitter released róalso developer tools for direct messaging from the beta. You can find there such features as quick reply, welcome message, buttons in messages, user feedback forms. These have already been tested and implemented m.in. by Samsung, MTV or Tesco. Samsung, for example, allows its users to select the perfect TV with a few questions sent in a direct message (pictured above). Tesco, on the other hand, collects customer service information using a bot. 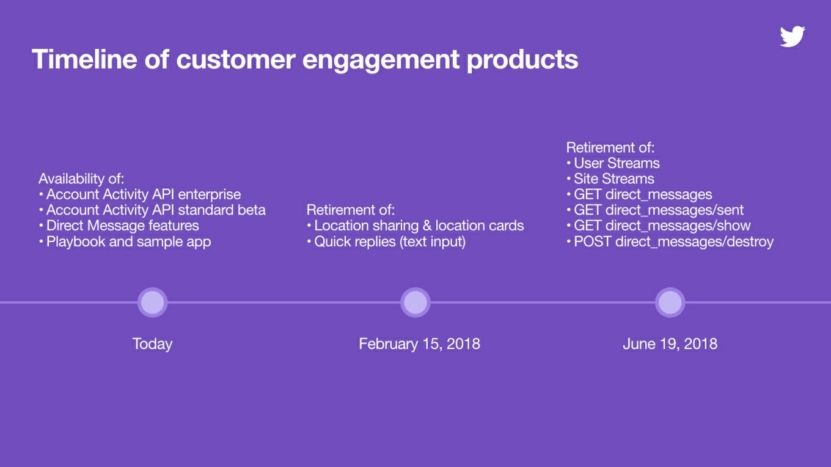 On the occasion of the exit from the beta Twitter removed several tested features, such as automatic replies based on location, information about the hours at whichóThe whole industry at infoShare 2017.

All the changes and novelties introduced are probably a response of the chirping service to the actions of Facebook. Mark Zuckerberg’s portal has for some time become a platform dedicated to customer service, which is clearly evident, for example. in the recently presented solution that allows to use Messenger as a live chat directly on the company website.

ZaróBoth the new API and developer tools for direct messages are now available. Use, implement and share the effects!